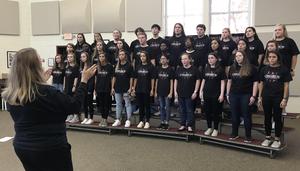 The choir, under the direction of Wendi Humphries, will perform on opening night, November 29, at the Epcot International Festival of the Holidays’ Candlelight Processional at Walt Disney World in Orlando, Fla. The Brookland-Cayce choir will join others selected by video audition from across the United States for the holiday shows. Brookland-Cayce’s choir performs at 6:45 pm and 8:15 pm at Epcot Center Amphitheater.

The choir will be accompanied by a full symphonic orchestra for its performance, which will include songs like “Shout for Joy,” “Il Est Né,” “What Child Is This,” “Silent Night” and “Joy to the World.” Epcot’s guest narrator for the opening night shows is Ming-Na Wen, the voice actor for the Disney Princess Mulan. The narrator reads the Christmas story, with choir members performing songs in the telling of that story. Brookland-Cayce choir members will become Disney performers, wearing Disney choir robes and holding electric candles.

“The students are excited,” said Humphries, whose Honors Choir is making its third appearance at the popular holiday festival. “They will gain a worldly experience of performing at Disney and will be singing several songs in foreign languages to represent the different countries in Epcot.”


In fact, the most challenging part of preparing for the program has been learning and memorizing 14 songs over the past several months of rehearsals.

“The music is fantastic, making it much easier to learn, but memorizing songs in languages such as French and German has proven to be challenging,” said Honors Choir member Anna Burkett, a senior who will be seeing Disney for the first time. In the choir’s down time, they will have a traditional Thanksgiving dinner and visit Universal Studios, Disney’s Epcot and Magic Kingdom, and others.

“Disney is so magical and makes everyone who visits so incredibly happy,” said Burkett. “I can’t wait to be a part of that magic! I’m so excited about our performance. I know it will be an absolutely magical and life-changing experience!”


Humphries is excited for the exposure and experience her Honors Choir students will receive as part of their festival performance. Once they return home, they will be getting ready for the SCMEA State Performance Assessment Choral Clinic this spring,


“The students will make many memories at The Happiest Place on Earth with 40 of their friends,” she said.