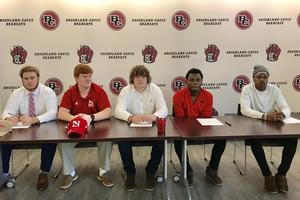 The athletes participated in a ceremony to sign their college letters of intent on National Signing Day February 5.

The five Brookland-Cayce High football players are: Drew Weed and Tradd Castles, both declaring with Newberry College; and Brian Mims, KJ Blackmon and Malachi Brown, who declared with Erskine College.

Families, friends, and fellow athletes and students attended the event, which was held in the Hall of Fame room in the school’s arena.