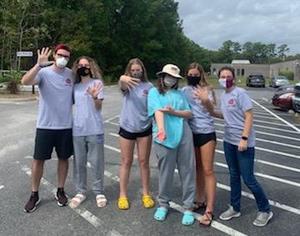 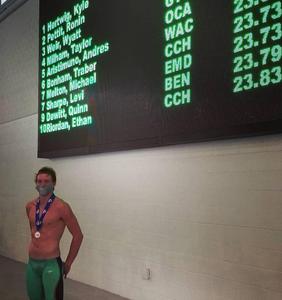 BCHS swimmers place in individual and team events, including a silver medal for senior Ronin Pettit

The boys followed up with their competition October 12. Ronin Pettit led the Bearcats with a silver medal in the 50m Freestyle, and a fourth-place finish and new school record in the 100m Breaststroke. The 400m Freestyle Relay of Ronin Pettit, Landon Hix, Drew Hix, and Matt Edwards also got a top-10 finish and broke a 17-year-old school record.

"The BC varsity swim team faced quite a bit of adversity this year, but they faced it admirably,” said Coach Christian Mowles.  “We had our pre-season shortened due to the ongoing pandemic, but with the leadership shown by some of our seniors, we were still able to bring over 50 percent of our team to the State Championship meet this year. The amount of fight and dedication given to this team by this group of swimmers is evident by the results. Even with the odds stacked against them, the swimmers were really able to show up and swim hard.”

“I'm incredibly proud of this team for all they did this year,” Mowles added,  “and it illustrates to me the special group of kids we had on the team this year.”