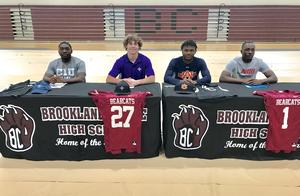 WEST COLUMBIA, SC -- Four Brookland-Cayce High School athletes have declared their intent to play their sports at the collegiate level.

The four seniors who participated in a signing ceremony Thursday announcing their collegiate intentions include:

In making the announcement to the audience gathered at the ceremony, Brookland-Cayce High School Athletic Director Rusty Charpia talked about the athletes’ talents and records,  noting most were standouts in other sports as well – including Daniels and Myers in football, and Wise in baseball – while Plane is one of the few in school history to be selected to both the Shrine Bowl and North-South game.

Thursday’s event, held in Brookland-Cayce’s arena, was attended by family, friends, coaches, and teammates past and present.