Brookland-Cayce High's Nathan Walton is News19 Player of the Week 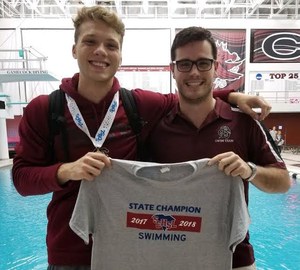 A feature on the swimmer will be on WLTX at 6:20 p.m. Wednesday, March 28, and on the station's website

The swimmer, who has signed a letter of intent to join the University of South Carolina team this fall, has been named the News19 Player of the Week.

A segment about Walton will be featured at 6:20 p.m. Wednesday, March 28, on WLTX, as well as on the website at http://www.wltx.com/player-of-the-week.

In recognition of the occasion, we are reposting below a story previously published about Walton in October 2017, after he won the state title.

WEST COLUMBIA, S.C. -- It was the final SCHSL championship that Nathan Walton would swim for Brookland-Cayce High School, and he wanted to finish big.

Though the 17-year-old senior had won a state championship as a sophomore in 2015 in the 100 fly -- along with other races as a member of the Palmetto Aquatics swim team -- he had taken home three second-place finishes in the 100 back.

“I came into the meet expecting to win at least one thing, maybe two,” said Walton, who has given a verbal commitment to swim for the University of South Carolina next year.

Walton’s drive to win propelled him to a first-place finish and the state title over the weekend in Class 3A in the 100 back with a time of 53.67. He finished third in the 100 free with a time of 48.06. The Brookland-Cayce swim team finished eighth overall in the championship.

“After three years of second in the 100 backstroke,” Walton said, “it’s great to finally be on top.”

Walton’s drive to be the best is one of the keys to his success in the pool, said Christian Mowles, an assistant swim coach at Brookland-Cayce who with head coach Isaac Badillo has worked with Walton for two seasons.

“Nathan's determination is one of his biggest qualities that makes him a great swimmer,” Mowles said. “His determination to get back on top, and the hard work he put in over the past year, allowed him to do just that.”

Walton started swimming around age 5 for Quail Hollow's summer league, and eventually started year-round with Palmetto Aquatics.  He’s been swimming at Brookland-Cayce since seventh grade and has been going to state championship meets since the eighth grade.

Walton hits the pool for practice early -- some days around 5:30 a.m. -- and swims about 12-13 hours a week. The days start even earlier in the summer, and the time in the pool stretches to at least 15 hours a week.

Meet days are a family affair. His father Ed often makes him an early breakfast -- eggs, grits, sausage -- and his mom occasionally helps in running swim meets, as she did this past weekend as meet director.

Walton said he gets ready for races by listening to a lot of music, often fast-paced hip-hop to gear up for sprint racing.

Support from his parents and coaches has been key in his development as a swimmer.

He said some of the best advice he’s gotten is from USC associate head coach Mark Bernardino, who encourages Walton to “work harder every day than you did the day before” and “pick a different thing every day in practice to focus on.”

And, at Brookland-Cayce, the coaches have "let me be more independent, and do what I need to do, then come compete with them,” he said.

While Walton said it’s hard to leave the Brookland-Cayce team, he’s excited about the possibility of swimming for USC -- and for being able to go out on a high note after Saturday's championship.

“The 100 back ending on that note,” Walton said, “it’s a great way to end my high school career.”

Mowles is proud of Walton’s Saturday performance, too, as well as those of the team’s other swimmers, among them Carli Baker, Josh Malpass, Ronin Pettit, Phillip Hutton, and Matt Edwards.

“We will be moving up to AAAA next season, which is more competitive and will pose new challenges,” Mowles said. “However, we have a solid group of swimmers returning next year, which should make for an exciting season.”