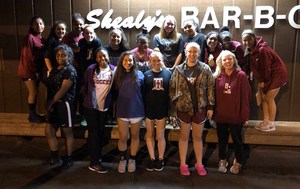 The team will host Georgetown in the first round of the playoffs Monday, April 30

And, team members wrapped up Thursday's game day much the same way they always do -- with a meal, on this night at Shealy’s Bar-B-Que in Batesburg-Leesville.

“Throughout the season, we’ve had meals out together,” said George Knox, who is in his first year coaching the girls soccer team at Brookland-Cayce. “It’s a tradition that they have had for years, so we wanted to carry that on.”

The team -- which finished with an 11-7 overall record and as region runner-up at 8-2 -- will host Georgetown at home Monday for a 6 p.m. playoff game, after the win over Strom Thurmond. Senior goalkeeper Alyssa Stevens recorded her 53rd career shutout in Thursday’s match. Arianna Fuller and Evelyn Frierson each had 2 goals in leading the scoring for the game.

If the Bearcats are going to advance through the playoffs, Knox said, the team is going to need to be “on top of our game as far as we can go.”

He will be looking to several players to make that happen -- among them Stevens, who is “the key to our defense and is a great leader,” Knox said, as well as Evelyn Frierson, “our center mid and our best all-around player -- everything we do goes through her,” noting she has 10 goals and 12 assists.

Others include team goal leaders Jasmine Gantt, with 17 goals and 6 assists, and Claire Adkins, second with 13 goals this year. Fuller, Knox added, is a defender who anchors that side of play for the Bearcats.

“We cannot afford to have a let down at any time during a match,” Knox said, “so we have to keep a pinpoint focus on every possession we have throughout the tournament, and then you never know what will happen.”

Knox, a Columbia native who previously had stints as a JV and varsity coach at Ben Lippen and assistant coach at Richland Northeast High, said what has impressed him throughout the season about this squad is its unity.

“My prayer for this team was not in wins and losses, it was their unity,” Knox said. “It hasn’t been easy, and even though there have been some tears shed, they have always bounced back.”